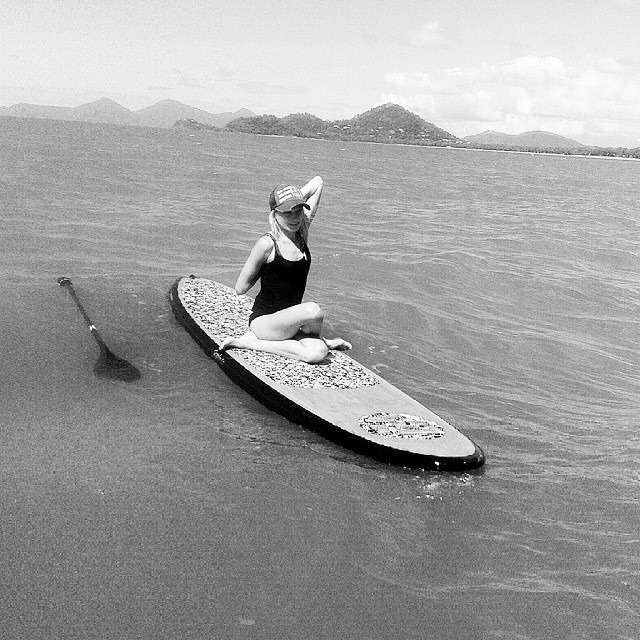 SUP stands for Stand Up Paddle boarding, a gentle sport that has taken the world by storm.  The SUPper stands on a board (well that’s the idea! but most beginners start on there knees..) and uses a paddle to glide over the water.  It looks easy, but believe me, it’s a little harder than it looks.

To stand up on the board and co ordinate the paddle requires focus and concentration as well as good balance and core strength.

You can SUP on pretty much any surface of water, I’ve tried it in rivers, lakes and the ocean in many places around the Cairns region (Lake Eachum, Lake Placid, Trinity beach, Buchans point and Palm Cove are particularly good spots)

So what is SUP yoga? SUP yoga is yoga practiced on a SUP board, on the water.  And yes, it is more of a challenge than yoga on the ground!

Many of the asanas that you practice on the ground can be practiced on the SUP board, but its best to start low and get the hang of it before trying the standing postures.

I would recommend starting with supine postures, like Fish Pose (which feels great when practiced on the water!) and then trying some seated poses before coming to standing.

I must add, the difficulty of SUP yoga also depends on where you are practicing! If you are on a calm lake it will be much easier than if you are in the ocean, even if the waves are small.  But both are definitely worth a go!

There are so many great spots to try SUP yoga in Cairns, my favourite spots being Lake Placid and Palm Cove beach early in the morning (sunrise over sea is just amazing!) 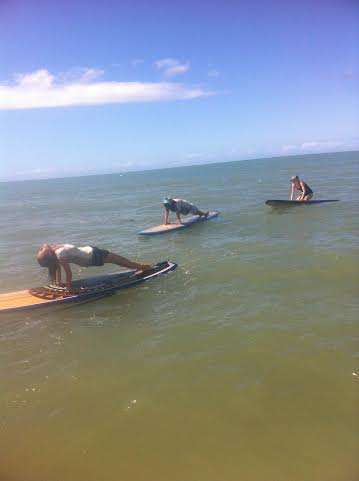 Why do SUP Yoga?

Yoga on a paddle board requires constant awareness and focus within the body- as all yoga does, but it seems to be magnified on the board as there is often a fear of falling in the water!

It builds strength in the body very quickly, as your ‘core’ has to be active to keep you from falling in.  Most people think the ‘core’ is the abdominal muscles, the 6 pack. In fact, the core runs through the center of your body, like an apple core.  This is the area that is activated when SUPPing, or when practicing SUP yoga.

So to summarise, SUP yoga improves balance, strengthens the core and improves focus and concentration.. and is really fun!

Give it a try! Try Sup Yoga in Cairns.  The region holds so many perfect spots for it, its would be a shame not to.